Everyone here is probably familiar with triangle stepping and angles. I constantly remind students that the FMA logo (triangle in circle) is not just symbolic, but also a more literal roadmap.

This is always shown with the "male triangle" which points up or forward. Forward usually means towards the opponent's centerline, but it can also mean facing the strongest point of his attack. Situations vary. Rotated, of course, into the female position, the points demonstrate angles of evasion.

Points are strong, being reinforced. Lines are strong in direction of movement from point to point. They are vulnerable, however, across their width. Think of a pencil; strong one way, weak the other.

Inside the triangle's lines lies our safe zone. Outside the triangle increases exposure. An example is doing a cross-block (a downward pointing defense on our check-hand side) but leaving our rear elbow or shoulder exposed wide, outside the angle of protection afforded by the defense.

The closer we get to the point, the tighter the lines and smaller the area we have to move to stay within them, yet the angles themselves are the same degrees of arc at any range.

This is a key essence of Serrada. We want to find the smallest, tightest range at which we can function. It represents our last line of defense, what is closest to us.

Functionality is, of course, the key. Too much compression could be immobilizing or collapse. Some might think it lacks power because there is less room to accelerate. Understanding fulcrums and balance, however, gives us full measure. In every technique I seek to apply GM Ed Parker's three maxims for power: linear, rotational, gravity.

A basketball isn't a bad area of protection for the body, but a beachball is excessive movement. It it too much volume of space to protect and takes too long to finish a movement. Even largo mano (long range) techniques tend to hit pretty directly to the target. No matter what style you do, nothing matters until "point of impact" (POI) anyway, and so we want to maximize our effectiveness there, whether we hit and run or jam and control.

Range is a basic tactical choice, but efficiency is even more fundamental. It allows us more time to observe our opponent and to engage less telegraphically.

Like a sine wave, greater ranges involve more momentum whereas closer ranges increase frequency though the energy can remain a constant (how a whip accelerates and cracks, for instance). Top speed is traded for speed of reversal, and to a certain extent power might be traded for accuracy (though expert proponents can demonstrate otherwise).

Closer ranges have different risks. There are fewer weapons to monitor at longer ranges. As one moves in, the opposing hand can strike, then grab, then envelop or encircle. One needs to be as aware of one's own vulnerable targets as is attention to the opponent.

Once again we have our "threat triangle" to monitor, and this has been a reminder to keep everything protected within it, both front and rear sides of your body. Pay attention, as you move your guard towards or or away from your opponent, how it will open and close different areas relative to your opponent's weapon and centerline.

In this diagram we stand in the center of our circle/triangle, which is the point to which our opponent reaches. The back half is our largo range where we move our vital targets out of reach. 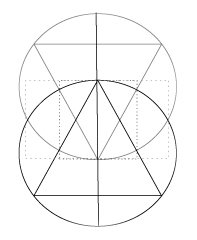 This might be redundant to many, and others may not want to dig through the archives anyway. Regardless, it's always good practice to review fundamental concepts, refreshing the touchstone from which we measure our understanding and progress.
Posted by Stickman at 2:47 PM