The “Threat Triangle” is a term I’ve coined to describe the tactical use of the lock position. Again, it is not a static position but an active and responsive tracking method. We want our “guns” facing the main threat, and there are nuances to this orientation as we move relative to an opponent.

The most fundamental is footwork, using the male triangle to face the opponent’s centerline. We lead with either foot, using papeet (replacement step) to orient towards either the left or right sides. If we control the center of the encounter, there are advantages of leverage and shorter lines of movement with the shorter stick.

Our basic consideration is the centerline, which is the most inside line. Our footwork and weapon should maintain directness.

There is also an outside line, which is the widest angle from which we need to guard against the most likely threat presented at that moment.

If we just lock facing forward and the tip of our opponent’s weapon can thrust around our guard, we are vulnerable; think of a rapier or dagger.

Too many people just finish a technique, give a cursory lock, and they’re done, or they just step straight up the center as though that threat had been neutralized. The purpose of the lock is to defend against the next attack. Why assume it will not be with the same weapon, from its previous position? Angel Cabales was a master of the quick thrust, and the lock has to be able to intercept that. For this, angle is critical.

If our opponent is beyond contact distance, the angle between his centerline and outside line is very slight. As we approach, that angle gets wider, and the longer the weapon, the deeper he can reach around us. Visualize his attack as anywhere on an arc, with you in the center of the circle.

At a longer distance, or closer but all weapons forward, our lock can be straight in front. If my opponent’s weapon is off towards my right, that is the side I most likely need to defend, and if he moves the other way, I should be shadowing that direction.

The idea is simple. If I am already in a position that cuts off a surprise attack simply, without resorting to a long or complicated maneuver, my defense will be quicker and more likely to succeed. I don’t want to have to think about a sudden threat when it’s time to react, so if I’m already pre-positioned to intercept that move, I get better use of trained subconscious reflexes.

I can’t always just rotate my body or move my weapon over to cover an angle because I might expose another, more vital one. If the threat you track is a fake, you may have played into your opponent’s strategy.

A good way to solve this is to angle my weapon, using the male triangle principle. For instance, if I am in a right lead, my opponent might be showing a low thrust to my left abdomen. If my weapon is just forward, I’ve left him that gap. If I angle the tip of my weapon back toward the left, my right hand covers the centerline. Both inside and outside angles have proximate coverage.

If my opponent sweeps his weapon to the other side, I would papeet into a left lead. Now the tip of my weapon covers the centerline while my right weapon hand is tracking the opposing weapon. At all times some part of my weapon accounts for every angle his weapon’s got. 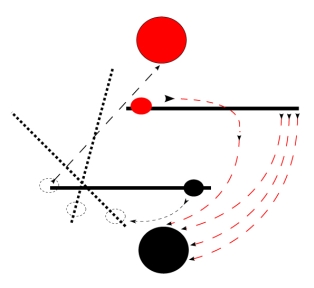 Notice the entry path available from the end of Red's stick using an arcing strike. There is also a line showing how moving Red's hand over across the body allows even deeper access toward the front of our body. This is particularly important against witiks (snapping blows), especially if sharpened by reverse tapping our own arm to accelerate the effect.

The defender also has a similar angle to counter-attack in this diagram. Black shows a thrust on a direct line from the tip as his hand moves over to compensate. The Threat Triangle is thus the separation by degree of incoming angles we have to monitor, from the weapon hand to the the end of that weapon, as these lines converge on target. In other words, an attack can come from either end of the weapon! We can see this triangle clearly in Black's diagram, using the lines of sight and thrust.

My old Kenpo teacher used to have us imagine having an eye on the toe of our foot. We'd actually place our head on the ground to see what openings that our foot could "see." I do the same thing with my stick, because what is apparent from the tip is different from what I see where my head is located. 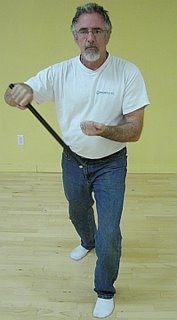 Here I'm facing forward once again, but I'm guarding against an attack from my right, closing off the low line off attack from the tip of an opponent's weapon. Compare the stick position to that in the picture on the previous post. There my opponent's weapon is directly in front and so my angle is more direct.
Posted by Stickman at 12:21 AM