It’s always special to see something come together that’s been a long time coming. Sometimes a small change makes a big difference, breaking up what is routine and opening new possibilities.

My inspiration comes from the late great Sonny Umpad. Last weekend was a gathering of the Visayan clan. I was already thinking of how to get copies of a magnificent 12" training blade Sonny made for me many years ago. It was so nice I never wanted to use it or risk losing it (which I did for about 2 years, another story). With the cost of manufacturing so high around here, I decided to make my own copy by hand.

The first one took me hours. I traced the original, scanned it into the computer, then resized it to fit a piece of paper and printed it out. I cut that out and taped it to a solid billet of plastic and then went through various stages of cutting, grinding, filing, sanding and polishing. When I was done, I had a really cool training knife!

The next day I decided to make another, which went faster. Now I was more confident in the techniques I needed to make these. I had one last odd shaped piece of material left, which I turned into two 19” krisses.

Here’s where the fun began, because now my students and I got to start playing with the new toys to see how well they hold up in use. The plastics I use are much tougher than almost any wood yet gentler against other sticks than metal. The way I finish these makes them look like wood. Sometimes I have a hard time convincing folks it isn’t what they think.

What surprised me was the sudden increase in accuracy my students showed with the krisses compared to regular sticks. While the techniques themselves required some adjustments to really align the blades, it was the basic strikes that caught my attention. Whereas I’ve critiqued students at times for holding back and not throwing strikes to the target, with the krisses their attacks were as close and precise as I could wish. There was something about the mass and shape of the weapon that focused their mind and body into the strike in a new way.

The krisses, at 19”, are heavier than most sticks but feel secure because of the grip. The triangular blade shape seems to draw attention towards the tip, which has a slight downward hook. One student called it a “hawk’s beak”, saying he felt as though it wanted to bite into the target. Whatever the reasons, drills and sparring this week hit a new high, and those are moments a teacher savors and will remember.

Of the two large blades, the first has a thinner handle because my material was oddly shaped, missing a rectangle I’d cut out years ago for the prototype of my commando blade. It lacks the mass of the lower guard in front of the knuckles at the bottom of the blade, which helps balance the tip, so I made the blade thinner and lighter (except for the tip, which I’m leaving blunt). I always say the weapon will tell you how it likes to move; this one has a light feeling, responding like an extension of the fingers with quick reversals. The balance is almost like an Indonesian kris.

The second kris feels bigger, with a slightly broader handle and blade and a straighter alignment. This is more similar to my heavy Moro kalis seka and is more suited to powerful slashes, with control coming from the wrist.

My smaller knives follow a similar pattern, with the first slimmer in the hand and the second one more robust but with more defined grind lines.

After 2 hours of heavy use yesterday, they don’t look quite as shiny and new, but that’s ok, these are supposed to be training weapons, not show pieces. I love having these in my stick bag, but I’m sure they won’t stay there much when it’s time to play!

I’ve already had several people ask if I’m going to sell these. The answer is probably yes. These are labor intensive, but if I make them by hand I can sell them retail for what machine shops would charge me just for cutting the basic form, which I still have to finish by hand. I won’t have large quantities in stock, and each one will be a little different, but that isn’t necessarily a bad thing. I just need to keep honing my skills so I can refine various grips and blade balances towards specific goals.

Note: Last night, after writing this, I went to a party at grandmaster Mark Gerry’s house, a fantastic gathering of masters and grandmasters attending Wally Jay’s 90th birthday weekend events. The first, lighter kris really caught the attention of everyone who played with these. 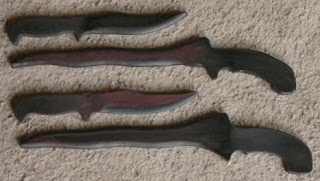