I knew my dog was quick, but now I have proof.

Normally my dog trots, about my jogging speed, or lopes along at what is my running speed. About once a month she hits another gear. I'll look up and there she is at the park or beach, flying impressively ahead of a pack of dogs. Still, she prefers to stop and sniff; she'll stand for half an hour over a gopher hole if I let her. Sometimes she'll catch them, other times she's just fascinated to watch. One day I even saw the gopher touch her nose twice without consequence!

On Memorial Day we were near the end of a long walk when I stopped to talk to two ladies who were helping look for a lost dog. I turned a minute later to call my dog but she wasn't there. I called and called for perhaps 2-3 minutes when I spied her over 100 yards away. She was running and I saw what I thought was a small dog. "Oh good! She's playing." Then I realized she was chasing a jack rabbit, the first I'd ever seen at the Albany Bulb (a wild landfill being slowly strangled by the park bureaucracy).

I started running toward the action while calling my dog when suddenly the rabbit headed straight towards me. Perhaps it understood that by doing so, I'd have a chance to grab the dog. The rabbit actually changed directions a couple of times right in front of me but my attempts to snag the dog's collar were futile.

I could see with every cut the rabbit made that my dog was closing the gap, a few inches at a time. While she was perhaps 6-7 feet back when I first spotted them, as they made the last cut in front of me the distance was less than half that. At this point I took off running after them, understanding what the outcome was going to be.

About 50 yards into the weeds the rabbit tried one last cut and the dog cut it off and pounced, coming up with a limp rabbit in her mouth. I was about four running strides behind, yelling "DROP IT!" My dog started to run off and then thought better of it and did as told, turning towards me in submission. I grabbed the collar and snapped on the leash and led her a few feet away from her prey. I looked back and the rabbit was watching, panting hard from under a clump of dry weeds. I didn't see any blood on either animal so we quickly left, hoping the rabbit could recover without being found by another dog.

Meanwhile my gal was panting heavily with her tongue out, which I'd never seen her do before. She kept that up for 15 minutes and slept quite well when we got home. I guess I can't sing Elvis' "Hound Dog" any more, since she HAS caught a rabbit. I've never seen a solo dog run one down before, though I've seen two dogs team up to do it. I've certainly never before had a dog with this combination of speed, agility and endurance. I was quite impressed and she seems to have a new sense of her prowess as well, which means I've had to go Alpha on her once or twice to let her know she's still #2 in my house.

We went back the next day to make sure there was no sign of a dead rabbit; the field was clear. I guess jack made it home ok. The birds (mostly red-wing blackbirds) made a big racket while we were out there though. It was as though they recognized my dog as the "almost" killer and were putting out the word.

What was so impressive was the drive and determination to complete her task once she was in motion. As martial artists, we could learn a lot from that. 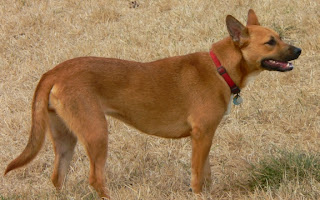