One of the things that attracted me to Escrima is the use of angles as a template for grouping attacks and various defenses against them. To me this seemed more scientific than randomly grouping techniques according to subjective criteria such as testing material for belt promotions.

There are many schemes for numbering these angles, but almost all weapon-based FMA systems share a similar #1 angle, the high right forehand. It is the most primal strike for most humans, utilizing lots of big muscles and gravity. The Dog Brothers refer to it as "the Caveman". By prioritizing it as the threat most likely to be encountered, a substantial proportion of one’s self-defense capabilities are instilled very quickly.

I think a lot of students overlook the value of that first angle. To many, it seems as though it is just a first baby step towards the real goal of learning higher, more “advanced” angles. In reality those are less common, and perhaps the sign of a more sophisticated attack. Duels between equals is rare; self-defense tends towards more basic and uneven scenarios.

I've seen students who excel at later angles because their skill was better when they got there, yet the basic angles that laid the foundation have not been polished to at least an equivalent level. In fact, one should excel at the basics because they have been practiced the longest and most often, a part of every session. One needs to be mindful not to look past these as merely warm-ups for the "good stuff". That is a waste of valuable learning opportunity. "A rising tide lifts all boats," and so skill should be applicable across the board.

Study pictures of riots whenever they are in the news, and what one sees is the same thing repeatedly - the #1 strike - whether by trained personnel or civilians. These are from today's news. 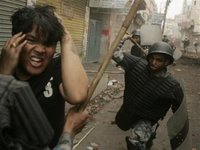 Even as early as the second angle, systems diverge in priority. For many it is a high right backhand strike, forming the other half of a downward figure-8 with the first strike. Others might emphasize a low horizontal forehand strike. The choice of weapon might dictate which is preferred. A horizontal forehand might be more natural with a long swinging weapon like a baseball bat or the rattan staffs of these Nepalese police, than using a high backhand as with a shorter club.

Another AP photo in the news today. Interesting shin guards.

Another reason the horizontal forehand (#3 in Serrada) might be common in police tactics is if a shield is used. Depending on equipment, that might tactically limit or even interfere somewhat with cross-body backhand strikes. Also, this group is so close together, only vertical strikes can be used without hitting their own people.

Know how to defend a few angles well and you are covered for most contingencies. As Angel Cabales used to say, the advanced angles are more for recognizing an unusual attack and using what you already know. The basic skill set will still be effective if you've learned it well. The training for those angles refines those skills, more than being anything completely new and different.
Posted by Stickman at 10:26 AM