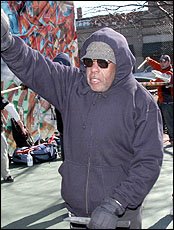 The FMA community is fairly small. Those of us who participate actively hear about or come in contact with each other from time to time, though it’s hard to keep up with the growth of the art and all the new people who are coming up. The elders in the art, however, are a dwindling group, just as steadily leaving us to make way for the new.

The first thing I learned this morning was of the passing of Guro George Brewster back in Boston, Massachusetts. I never met Mr. Brewster, but about 15 years ago or so we corresponded and talked on the phone a few times. One of my goal in doing Stickman Escrima Products was to create a matrix that would put me in touch with other people doing FMA (this was before the internet was the staple it is today) and Mr. Brewster was the kind of person I was most pleased to get to know, a real gentleman and a pioneer in teaching this art here in the U.S.A.

There were one or two transactions where he bought some sticks from me, but mostly I remember our conversations. I asked a few questions, mostly listened. Guro Brewster taught Lanada Arnis, originally starting in the ‘70’s under Amante Marinas Sr. and then continuing as Grandmaster Lanada’s representative in New England after Marinas formed his own association. Mr. Brewster also knew something of Serrada through both GM Angel Cabales and Master JC Cabiero.

There was an article in the Boston Herald just a month ago, showing him leading a class outdoors in the cold at age 81. He was a tough old guy, a veteran of the Battle of the Bulge, who would carry a shovel on the bus (along with his training gear) to clear a space in the snow to train in the park with his students.

George passed away quietly in his sleep after a typical day of training hard with his students. It’s good to see he was active so long, sharing what he loved to the end. It’s unfortunate that, like so many instructors, he only had a few dedicated students, and then towards the end there was a sudden upsurge of interest.

It’s funny how some people make a strong impression in just a few moments. I’m sorry I never got to meet him in person, but he is someone I never forgot about over the years. Those who knew and trained with him have lost not just a mentor but also a friend. Train strong and keep his legacy alive. I’m sure that would make him proud.


Update: I just had a long conversation with sensei/guro Peter Freedman, who is the designated successor as head of the Boston Arnis Club. He can be reached through his website for the Ketsugo Jujutsu schools and George Brewster's Arnis in Boston and Weare, New Hampshire.
Posted by Stickman at 6:59 AM