In Serrada we do our high blocks differently than many other styles. Our weapon is generally 18-24 inches, shorter than the typical 28” escrima stick but similar to many bolos, machetes, krisses, etc. The length we choose should be proportionate to the reach from our armpit to our wrist, allowing the weapon to be concealed under an arm. This shorter length also brings the balance point closer to the hand so the weapon has a natural feeling of balance, not tip-heavy. This allows us to more easily control the angle of the weapon. With a long stick, for instance, rising blocks such as the umbrella or cross block are often done with the hand leading the motion and the tip of the weapon pointed downwards in a classic “wing” position. In Serrada, however, we keep the tip of the weapon up.

Sticks give us two things, extension and leverage. By raising the tip we project our weapon in front of the motion to get to our point of contact faster. For example, if we have to raise our hand all the way to the top of our head to protect it, that may mean moving it 2 feet or further. However, if our weapon is angled upwards, we might only have to move 18 inches. Reducing the distance we have to travel in effect makes us 25% faster!

The generic FMA logo of a triangle inside a circle is an actual physical map to help analyze structure of movement. In this case, visualize the upward angle of the triangle as the angle of the stick.

Another way to figure this out is to hold the stick so it touches your shoulder and your head. This is the critical line, because what is below the stick is protected by it, whereas anything above it is an open target.

A common mistake is to bring the hands up in front of the face then opening them up too early. I call this a “windshield wiper” because it sweeps the stick across the face, rather than framing the head. It won’t be effective against a powerful blow and even if it does deflect it could result in dragging the opponent’s weapon across your face.

In every technique I emphasize three aspects – weapon, check hand, body angle/positioning. One of our tricks is to let the opponent come in, thereby making him commit to his attack. We move our body so the intended target is not where he is aiming, but we bring our defense to that point to make our interception. The opponent feels contact where he expects it, but it isn’t what he had hoped to hit. Thus against a high strike we slightly lower our center. By moving out of the target zone we decrease the odds of getting hit, at the same time allowing us to move our hands an even shorter distance to cover up against the attack. This increases our apparent speed yet again, though in fact we are not moving any faster. It just seems that way because the distances and angles are tighter.

One tip, particularly on an umbrella, is to listen to the impact. If the sticks chatter, the tip was down, resulting in multiple taps. If the sound is clear and crisp, the tip was up, driving through the opponent’s strike. A cross block is quieter, since it’s a “trap door,” allowing the opponent to fall through his intended point of contact. Advanced players may not seem to raise their hands as much in the cross block, but that’s because, as Angel Cabales used to say, they know how to make shortcuts work. First, however, it’s important to learn the safest and most secure way to use these techniques; getting hit is a mistake!

For the umbrella, it is imperative to drive upward into the attack, clearing the head. Our footwork generates force through the papeet, a quick drop with the lead foot to ground us and create an upward shock wave at the moment of impact.

Notice in the following photos how I play "peek-a-boo" under my hands. Note the triangular structure of the arms and stick, and that I'm not leaving my head exposed to the incoming angle (slight variation between the two below on that basis). Also notice that my knees are bent, lowering my center for stability and moving the target zone. Though my weight is shifted forward, my hips are balanced.

Finally, check how my front foot is aligned on my opponent's centerline, utilizing the male triangle. The rear foot is aligned with the line of force of the incoming blow, a difference you can see between angle #1 and angle #2. The last two photos show how similarly I set up for both the cross and umbrella on angle #2, though I do tend to squeeze my thighs a bit tighter together on the latter to make the counter more explosive. 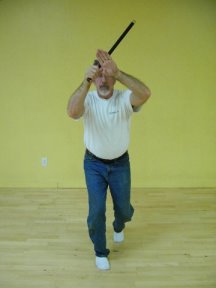 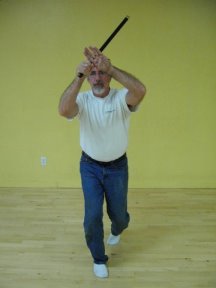 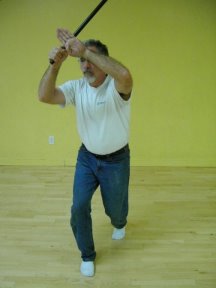 Another view of the cross block vs. angle #2 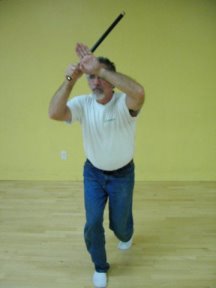 This was from an umbrella against angle #2
Posted by Stickman at 6:38 AM